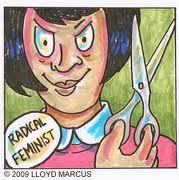 My name is Edgar van de Giessen. I am 45 years old and I am the son of one of the former leading feminists in Holland in the seventies of the last century. My mother was the first woman to receive the Harriet Freezer Award, given out by your organization Opzij for outstanding feminist activism.

I do not write this to seek any personal sympathy. I write this to share my heart, so that maybe one day men and women may live in love and respect, and not just in mutual legal equality.

Before I describe the personal consequences of the feminist upbringing I received as a boy between the age of 7 and 17, I want to express my respect for all women and men who rightfully protest against repression and discrimination on the basis of gender, skin color, or ethnic background.

Therefore I would like you to imagine how it is for an growing boy in the age of ten to hear every day from his mother that men are the cause of all trouble in the world, that men are guilty of all crime and war and repression in the world, that all men should be castrated after their semen has been deep-frozen to ensure the existence of the next generation, that men should live in different cities than women, so that they could all kill each other and so solve the problem of their own existence.

This is the kind of feminist teaching that I received every day, and created in me a deep mistrust in myself, in male authority, and a feeling of never being able to be good or lovable as a human being because of my maleness. This caused in me a reaction of proving my mother that at least I as her son was different than other men. This quickly turned into arrogance against other men that made me lonely and bare of friends for most of my life.

It also caused in me a hate toward women and an anger that I could only repress, because expressing it would prove my mother to be right. This repression thus turned me into a “nice” man as a compensation for the repression who then inevitably held a hidden hate and aggression against women with fantasies of rape and violence.

As a result of all of these effects of a rabid feminist’s effect on her son, I needed 25 years of therapeutic and spiritual search and deep emotional healing to begin to find my own self-value and to start to experience fulfilling relationships with myself, men and women.

The war between the sexes is still unsolved. Divorce rates speak their own sad truth. Violence between men and women still fills the newspapers and feminism has not been able to solve this problem. In my personal case, feminism itself, as it is expressed in ways your organization specifically espouses, in large part created the problems and not prevented them. And if feminism causes men to hate women by cursing the darkness and not lighting an effective candle, feminism needs to ask itself if it is aware enough of the human heart and its complexity to be able to solve the problems it describes.

When my mother was giving her feministic lectures and tirades to me as a boy, she never felt once, in all those years, how her words and energies were landing in her own son. Personal love transacts through the ability to feel what the other person is feeling while (s)he is feeling it. The emotional wounding that my mother gave me did not come only from her words, but also in her not-feeling how her words impacted me as a little boy. In these ways, my mother had her own emotional wounding that turned her into a proudly man-hating, feministic unfeeling woman whose antipathy against men in ways supported by your organization turned in me as a hate against myself and against women.

What I want to say, is that however some aspects of feminism have an important role in creating equal rights for women, feminism does not have a positive contribution to how men and women can live in respect and love for each other. My intensive feminist upbringing created exactly the opposite. An emotionally healthy man will never have any wish to oppress a woman. An emotionally healthy woman will never have any wish to beat the man with his own weapons.

The feminism of the seventies and eighties whose legacy you inherit is a reactive movement that used the same oppressive energy as it was trying to fight against, instead of working with, the real issues, and therefore can never be successful in creating an atmosphere where loving and powerful femininity could blossom in a trusting and respectful atmosphere towards male strength. I do feel and understand that women can only respect male strength if that is rooted in openhearted vulnerability, but feminism and the emancipation movement failed to bring forth a generation of such men and in itself does not have the means to do so.

In that way, the feministic movement does not and cannot acknowledge the seminal repercussions of the fact that every man is raised in large part by a woman, and that his adult relationship to women consciously and unconsciously is determined in this large part by his relationship to his mother. Why hasn’t feminism created a vision on how to raise boys into loving and strong men, upon whom women can trust and love? How can it happen that boys turn into men that repress, hate, despise or do not respect women? I am convinced, that if a boy receives healthy emotional love from his mother, this cannot happen!

It that sense, feminism has always lacked a vision of what emotional health is, how emotionally healthy love can be transacted from one human heart to the other, from mother to son, from father to daughter, from man to woman and from woman to man.

Without this vision, whose lack can never be addressed within the myopia feminism has about the human heart, regardless of gender, feminism remains a mere reactive movement that thus incorporates the very themes in men it teaches are wrong, and sadly will never allow it to ever achieve its own purpose.