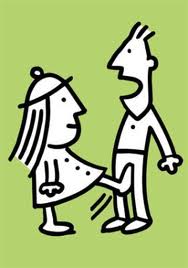 People hit and abuse family members because they can.

In today s society, as reflected in TV, movies, law enforcement, courts, and feminist propaganda, women are openly given permission to hit men. Presently 25%-30% of all intimate violence is exclusively female on male.

Primary aggressor laws usually result in arrest of the male and ignore research showing 50% of domestic assaults are mutual combat. The woman is thus encouraged to abuse her partner further until finally he will take no more. Such provocation of the human male is dangerous.

Studies consistently find women use weapons more often in assaults than do men (~80% for women; ~25% for men). Women are significantly more likely to throw an object, slap, kick, bite, or hit with their fist or an object.

There is no support in the present data for the hypothesis that women use violence only in self defense. Three common reasons women give for male abuse are: to resolve the argument; to respond to family crisis; and to stop him bothering me. Male abuse of a woman, requiring self defense, is one of the less-frequently stated reasons by women for their assaults.

Our research shows that a gender-balanced approach to domestic violence is essential in order to reduce both the frequency and severity of such incidents for both men and women. Present laws and practices appear to commonly have the opposite effect.